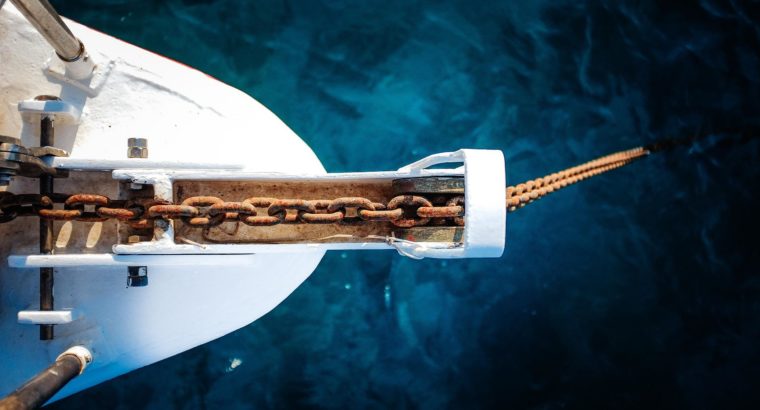 How to anchor the ship correctly?


How to anchor the ship correctly?

Anchoring often looks simple, but if you want it to be secure, it takes time and a few simple steps. At the beginning of the season, a brief overview of the biggest mooring mistakes and the most important rules.

“An anchor manoeuvre? He has to go fast. And look great! ”

There is no doubt – nothing attracts attention like a yacht that sails elegantly into the bay and skillfully stopped. It lowers the anchor and the crew jumps into the water as soon as the captain switches off the engine. Pure summer joy – and by the way, it looks like an experienced skipper is moored.

Is anchoring really that easy? The weather is nice. What should go wrong? But to make the long-awaited trip truly a dream trip, you should remember just beforehand how to anchor properly.

Clear sky. Calm sea. Only slight ripples on the water in the bay. The captain only has so much chain that the anchor just touches the bottom. “Why let go of the whole chain for a short swim now?” Some yachtsmen say to themselves.

Wolfgang Dauser, founder and CEO of SeaHelp, knows this well. “The reason for many SeaHelp tasks is the so-called stop when swimming in the best conditions. As the ferry passes the bay a few nautical miles away, it often happens that the waves of the ferry hit carelessly anchored yachts unprepared – and move them 5-10 meters back. That’s enough for grounding and heavy collisions with other boats. ”

“I have quite a lot of chain in there!”

In a recent interview with YACHT’s KROATIEN-SPEZIAL magazine, Wolfgang Dauser talks about one of the most common sailors’ mistakes behind such accidents: “In 70 to 80 percent of all cases, the chain is not fastened enough. Or it was anchored too close to the rocks. ”

That’s right: To be safe, you need at least five times the length of the water depth chain – for example, at a depth of 5 meters, a chain of 25 meters. But it’s easy to be fooled by a length that’s really out there. Markers are often affixed to charter yachts to control them. And if not? The easiest way not to be wrong with the displayed chain length, even without a label, is as follows:

Before the anchoring manoeuvre, test how many meters the anchor winch travels per second. When falling, it will usually be about 1 meter per second.

From the “Let go” command, the captain and crew slowly count to 25 and then stop the mooring winch while the captain gently directs the yacht backwards. There should now be about 25 meters of chain outside.

You should pay particular attention to the depth of the water on the steeply sloping shores, such as those found in the bay around the capital of the island of Cres and especially in the South Croatian anchor bays. Here it is true: The water depth is not measured under the keel, but under the anchor winch, in the bow. In case of doubt, it can be 2-3 meters greater water depth than under the keel.

Does it really hold? There is only one thing you can be sure of: TEST! Anchoring without a test is like driving a car without a seat belt – you don’t know where and how to end up when the worst comes to the worst. There are several ways to test:

Testing under the engine:

As the captain slowly directs the yacht backwards in the wind, he disconnects and lets the yacht carry on until the crew signals the manoeuvre, “Chain tight!”

Then briefly engage the clutch and carefully pull back and engage the transmission.

If the chain remains taut and the anchor holds, test carefully with more throttles.

If the chain jumps on the sprocket in the bow or on the winch, the anchor also jumps over the bottom – it does not hold and slides on the bottom. Then there is only one thing to do: start the anchor manoeuvre again and repeat. As long as the anchor holds.

Check the marks on the shore.

When the anchor chain is taut, the captain and crew observe the direction sign they have previously selected on shore: two trees that are on a slope at a certain distance in a row exactly in position with the ship’s deck. Power line pole in accordance with the chimney of a remote house…

If the two target points do not move apart, the anchor holds. If they move, the anchor does not hold. Start the anchor manoeuvre again from the beginning.

Go to the water with a snorkel and diving goggles. Snorkel to the anchor to see if the anchor is properly anchored in the sand or rocks. Or whether it just hangs at the tip on a rocky outcrop or just lazily lies on its side, or lies freely on seaweed. Ideally, this test requires a water depth of 5 meters. From 10 meters the anchor often disappears in the dark, depending on the light conditions.

By the way: If you want to sleep peacefully in anchor bays at night when the wind is blowing outside, use all three methods. And for every anchor manoeuvre. At every night mooring. Even under the best conditions.

“I’m anchoring everywhere with my anchor.”

Confidence in your equipment is good, but you should know the bottom – especially the bottom under the boat. When looking for a berth, you should look for suitable places with sand where the anchors are best attached. Seagrass is less suitable, apart from poorer engagement on slippery tufts of seagrass, the anchor destroys valuable land, which, for example, in the Balearic Islands they strictly monitor and severely punish. Nature conservationists are hired for this purpose.

Rock slabs are also a second choice and are only useful for short-term anchoring at shallower depths of 4-5 meters, so you can dive or help yourself in case of doubt. Rock slabs with cracks or other rock formations into which the anchor can be caught are unsuitable.

“We’ll couple the two in pairs with the second yacht.” If we connect with another ship, mooring is even safer! ”

It sounds logical, but it can be a fatal mistake. When both yachts are affected by the current or the wind, when night gusts from different directions force the yachts to dance in circles, the alleged safety aspect becomes flawed. Just one quiet turn in a circle and the “chain salad” is ready. Yachts hang together for better or worse. The sky can only be separated by loosening and dropping the anchor device – a maneuver that is especially dangerous in critical weather conditions.

Remember that it is never a shame to consult an experienced sailor about mooring.